The domestic maritime industry creates 65,990 jobs and $14.6 billion of economic impact in Florida

According to the findings of a new report conducted by PricewaterhouseCoopers (PwC) on behalf of Transportation Institute (TI), Florida ranks number two in the nation for the number of domestic maritime jobs, employing over 65,990 individuals and generating over $3.73 billion in worker income. 9,520 of these jobs are based in the Tampa area. This thriving industry produces $14.6 billion annually for the Florida economy, including $2 billion locally in Tampa.

The backbone of the domestic maritime industry is the Jones Act, serving as a pillar of economic strength and job creation for the Tampa area. Specifically, this law states that the transportation of merchandise between U.S. points is reserved for U.S. – built, owned, and documented vessels. 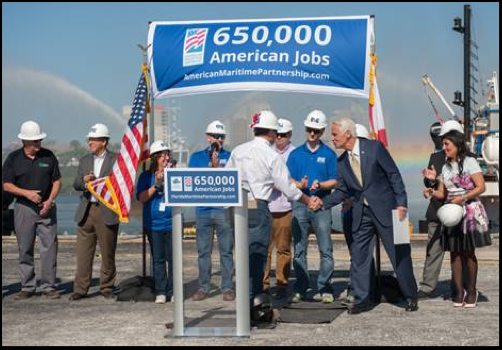 Rep. Charlie Crist is welcomed to podium; remarks highlight the importance of the domestic maritime industry

“The domestic maritime industry in Tampa is important not just for the stable and well-paying jobs it provides to Tampanians, but also the critical role it plays in our local, state and national economy,” said Tampa Mayor Bob Buckhorn. “With nearly 10,000 jobs and over $2 billion in economic impact in the Tampa region, and over 65,000 jobs and a $14.6 billion in economic impact across the state, the domestic maritime industry is vital in keeping Tampa and Florida a leader in the industry. When our local shipbuilders and maritime workers are able to thrive, the entire city, state, and country benefits.”

“The importance of the maritime industry to both Florida and the United States cannot be understated. A robust maritime industry means a strong economy, good jobs, and enhanced national security. I’m proud to support the work of the Florida and American Maritime Partnerships, and today’s effort to highlight the industry’s vital role to our nation,” said U.S. Rep. Charlie Crist (D-FL).

“This is good news for Florida and the greater Tampa Bay area and demonstrates the impact the maritime industry has on our economy,” said U.S. Rep. Vern Buchanan (R-FL).  “With 15 deep water ports, including Port Manatee, Florida has an incredible opportunity to grow its maritime industry to help diversify our economy, create jobs and move goods and services.”

“The impact of the domestic maritime industry in the state is undeniable – delivering over 65,000 jobs and generating nearly $4 billion in income across Florida,” said Florida State Senate Majority Leader Audrey Gibson (D-Duval). “The Jones Act ensures these jobs go to American workers, living and working in our communities. It is essential that we continue to uphold the law for these very real economic reasons.”

“Thanks to the men and women in the domestic maritime industry, our country is safer and our economy is stronger,” said Florida State Senator Darryl Rouson (D-Tampa). “Our ports are not just economic engines but a place of work for thousands across Tampa Bay and hundreds of thousands across the country. I am proud to support the domestic maritime industry here in Tampa and across the Sunshine State.”

“Across Florida and the country, the hardworking men and women of the domestic maritime industry are delivering for a better tomorrow,”said Florida State Rep. Jackie Toledo (R-Tampa). “With nearly 65,000 jobs, over $14.6 billion in economic impact, and $3.73 billion in worker income, the domestic maritime industry is vital in building and expanding Florida’s thriving economy.”

Maritime Leaders Recognize the Economic Impact of the Jones Act:

“The state of Florida is a leader in the domestic maritime industry, supporting nearly 66,000 family-wage jobs and contributing over $14.6 billion to the economy,” said James L. Henry, Chairman, and President of the Transportation Institute. “The findings in our most recent study demonstrate the strength and necessity of the Jones Act which serves as the backbone of the American maritime industry, the U.S. industrial base, and job creation for the hardworking men and women that crew the vessels delivering both in times of war and peace.”

“Florida ranks number two in the nation in the number of jobs driven by the American domestic maritime industry,” said Shannan Schuessler, Executive Director of the Florida Maritime Partnership. “The industry is responsible for almost 66,000 Florida jobs, which includes more than 9,000 jobs in the Jacksonville area. Statewide, these jobs generate more than $3.7 billion in worker income, and contributes more than $14.6 billion annually into the Florida economy, including almost $2 billion in Northeast Florida.”

“Quite simply, the Jones Act is American security,” said Matt Woodruff, President of the American Maritime Partnership. “In addition to the job creation benefits detailed in this study, our American mariners are relied on by defense leaders to project American force overseas in a national emergency.  Alongside our waterfront workers, they are the eyes and ears of homeland security on our nation’s coasts and waterways.  Our American controlled fleet provides economic security, ensuring that our nation’s internal freight transportation system, including fuel deliveries from American refineries to Florida, is not subject to foreign interference. American maritime jobs, guaranteed by the Jones Act, make this possible.”

“If you look around you today, the Jones Act can be seen in the tugs that safely assist large ships to docks at ports here and all over Florida. Those ships, many of them Jones Act vessels, carry everything from aircraft parts to zucchini.  These U.S. built tugs also push barges carrying petroleum products that fuel our vehicles on the road,” said Captain Willie Barrere, American Maritime Officers. “The Jones Act represents a substantial number of highly skilled, loyal and dependable U.S. merchant mariners capable of providing strategic sealift and other military support services in national security emergencies.”

“The recently issued jobs report from Transportation Institute and PwC highlights how important the American domestic maritime industry is to our region and to the entire state of Florida,” said OSG CEO Samuel Norton. “The domestic maritime industry in Florida has made significant investments over the past decade in infrastructure, new vessels and in training US mariners. These investments benefit America – Florida in particular – by supporting critical distribution networks and by providing vital resources for our national security.”

“In 1926, my family set sail on a new venture that would change my life and the life of the hundreds of men and women who have helped build, run, and grow Hendry Marine,” said Kelly Hendry, President of Hendry Marine Industries. “Though the industry has changed, the one thing that has remained constant is our support for the Jones Act. Without the law, our family run and owned business and the jobs it has created would not exist.”

Thanks to the Jones Act, the domestic maritime industry now employs approximately 650,0000 Americans across all 50 states, creates $41 billion in labor income for American workers and adds more than $154.8 billion in annual economic output each year. Nationally, there are more than 40,000 American vessels –  built in American shipyards, crewed by American mariners, and owned by American companies – that operate in our waters 24-hours a day, seven days a week.

American Maritime Partnership (AMP) is the voice of the U.S. domestic maritime industry, a pillar of our nation‘s economic, national, and homeland security. More than 40,000 American vessels built in American shipyards, crewed by American mariners, and owned by American companies, operate in our waters 24-hours a day, seven days a week, and this commerce sustains nearly 650,000 American jobs, $41.6 billion in labor compensation, and more than $154.8 billion in annual economic output.  You can learn more by visiting www.americanmaritimepartnership.com.