The domestic maritime industry creates 65,990 jobs and $14.6 billion of Economic impact in Florida

According to the findings of a new report conducted by PricewaterhouseCoopers (PwC) on behalf of Transportation Institute (TI), Florida ranks number two in the nation for the number of domestic maritime jobs, employing over 65,990 individuals and generating over $3.73 billion in worker income. 9,120 of these jobs are based in the Jacksonville area. This thriving industry produces $14.6 billion annually for the Florida economy, including $1.84 billion locally in Jacksonville.

The backbone of the domestic maritime industry is the Jones Act, serving as a pillar of economic strength and job creation for the Tampa area. Specifically, this law states that the transportation of merchandise between U.S. points is reserved for U.S. – built, owned, and documented vessels. 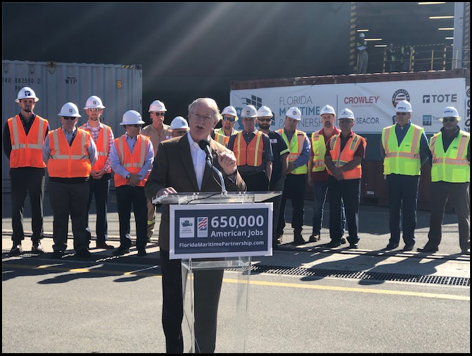 “The strength of Northeast Florida’s domestic maritime industry helps position our region as the logistics hub on the Eastern Seaboard. Our vessel operating companies, shipyards, and maritime professionals create thousands of jobs each year and propel our economy forward. In Congress, I am proud to support pro-maritime policy such as protecting the Jones Act and investing in our seaports,”  said U.S. Rep. John Rutherford (R-FL).

“Ports play a vital role in Florida’s economy and produce stable jobs for our workforce,” said U.S. Rep. Al Lawson (D-FL). “This recent study is evident that Jacksonville’s maritime industry is essential to the state’s overall economic growth. Our hardworking men and women who crew the vessels work in this critical sector to ensure our national security, stimulate trade and promote economic prosperity.”

“Our local domestic maritime industry is thriving, and I’m proud to support the nearly 10,000 men and women in the Jacksonville area working in the industry. Florida mariners generate over $3.73 billion in worker income, and contribute to over 10% of the state’s workforce,” said Florida State Rep. Cord Byrd (R-Neptune Beach). “We’re happy to see this growth continue in our communities and across the state.”

“Florida has long been a leader in the American maritime community, with over 65,000 domestic jobs across the state. We’re proud to stand with this community that is not only vital for American national security but also delivers a major economic impact nationwide, and right here in the Sunshine State,” said Florida State Sen. Aaron Bean (R-Fernandina Beach).

“The impact of the domestic maritime industry in the state is undeniable – delivering over 65,000 jobs and generating nearly $4 billion in income across Florida. The Jones Act ensures these jobs go to American workers, living and working in our communities. It is essential that we continue to uphold the law for these very real economic reasons,” said Florida State Senate Minority Leader Audrey Gibson (D-Duval).

Maritime Leaders Recognize the Economic Impact of the Jones Act:

“The state of Florida is a leader in the domestic maritime industry, supporting nearly 66,000 family-wage jobs and contributing over $14.6 billion to the economy,” said James L. Henry, Chairman and President of Transportation Institute. “The findings in our most recent study demonstrate the strength and necessity of the Jones Act which serves as the backbone of the American maritime industry, the U.S. industrial base, and job creation for the hardworking men and women that crew the vessels delivering both in times of war and peace.”

“Florida ranks number two in the nation in the number of jobs driven by the American domestic maritime industry,” said Shannan Schuessler, Executive Director of the Florida Maritime Partnership. “The industry is responsible for almost 66,000 Florida jobs, which includes more than 9,000 jobs in the Jacksonville area. Statewide, these jobs generate more than $3.7 billion in worker income, and contributes more than $14.6 billion annually into the Florida economy, including almost $2 billion in Northeast Florida.”

“Quite simply, the Jones Act is American security,” said Matt Woodruff, President of the American Maritime Partnership. “In addition to the job creation benefits detailed in this study, our American mariners are relied on by defense leaders to project American force overseas in a national emergency.  Alongside our waterfront workers, they are the eyes and ears of homeland security on our nation’s coasts and waterways. Our American controlled fleet provides economic security, ensuring that our nation’s internal freight transportation system, including fuel deliveries from American refineries to Florida, is not subject to foreign interference. American maritime jobs, guaranteed by the Jones Act, make this possible.”

“As the number one U.S. port for commercial trade with Puerto Rico, JAXPORT is committed to supporting the island through good times, as well as in times of need,” said JAXPORT Chief Financial Officer Beth McCague. “JAXPORT would like to thank our valuable port partners, TOTE, Crowley and Trailer Bridge—for their long-standing commitment to communities on the island and to those in Northeast Florida.”

“The newly released economic data makes it abundantly clear how important a strong American maritime industry is to Florida and the U.S. as a whole,” said Tom Crowley, Chairman and CEO of Crowley Maritime Corporation. “This study shows that American vessels crewed by American mariners deliver enormous economic benefits, in addition to supporting American military readiness and homeland security. This is why our elected officials and experts in national and homeland security strongly support the American maritime industry and the legal framework that protects it.”

“TOTE is honored to call Jacksonville home and we are proud of the contributions our employees, vendors, contractors, partners and peers make to help drive one of Florida’s most significant economic engines, the domestic maritime industry,” said Kevin Kendrick, TOTE Chief Commercial Officer and Senior Vice President. “TOTE’s success, and that of our industry, is rooted in our commitment to safety, innovation and focused investments that create a significantly positive impact for those we serve and the areas in which we operate.”

“JAXPORT is emblematic of the powerful roles served by the Jones Act nationwide and here in the state of Florida. This port is the mainland hub for the state-of-the-art Jones Act service for Puerto Rico, featuring cargo ships powered by natural gas and operated by Crowley and TOTE in this vital trade — highlighting the venerable law’s role as a catalyst for American innovation,” said Mike Murphy, government liaison for American Maritime Officers. “This is one of many significant seaports along the East and Gulf Coasts of Florida providing for domestic cargo service, energy transportation, marine construction, ship docking and support services — American jobs and American commerce serving the citizens of the Sunshine State. The Jones Act ensures these crucial waterborne services are conducted by American vessels crewed by American mariners, creating a sound and dynamic national security bulwark in our ports and on our waterways at no cost to the American taxpayer.”

Thanks to the Jones Act, the domestic maritime industry now employs approximately 650,0000 Americans across all 50 states, creates $41 billion in labor income for American workers and adds more than $154.8 billion in annual economic output each year. Nationally, there are more than 40,000 American vessels –  built in American shipyards, crewed by American mariners, and owned by American companies – that operate in our waters 24-hours a day, seven days a week.

American Maritime Partnership (AMP) is the voice of the U.S. domestic maritime industry, a pillar of our nation‘s economic, national, and homeland security. More than 40,000 American vessels built in American shipyards, crewed by American mariners, and owned by American companies, operate in our waters 24-hours a day, seven days a week, and this commerce sustains nearly 650,000 American jobs, $41.6 billion in labor compensation, and more than $154.8 billion in annual economic output.  You can learn more by visiting www.americanmaritimepartnership.com.